The Hunch Back of Notre Minneapolis? 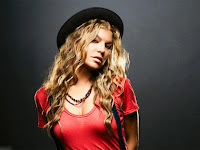 OK, I was torn between the title I used, or using the tune from the Black Eyed Peas "My Humps", and just replacing it with My Bump. It would have been much funnier! I can hear Don groaning right now! I was singing it last night, and he made a bad face. Oh Don.

I have a bump. A round, ugly, painful icky bump. I first noticed the bump a few weeks after I had my 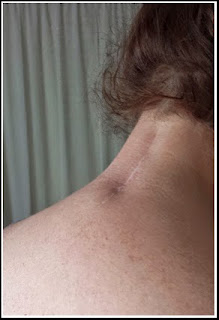 second neck surgery in October of 2014. It was right at the bottom of my surgical scar, and my first thought was that it was caused from an irritation from the doctor taking a "punch" of bone out of one of my discs. They used the bone to implant at the C5 level to get bone to grow where the center of the disc had been removed and failed to grow during the first surgery. I had seen the x-ray, and it literally looked like they took a paper punch and punched out the center of one of the edges of the disc and left sharp rough edges remaining. I felt worried about it, and mad. Seriously, couldn't they have taken one of the files off of their equipment shelf and sanded it down a little?

When I went in for my two month post-op check up I asked the surgeon about it. He said that it was just scar tissue, and completely normal. It didn't feel normal. It hurt, and felt sharp. But, who was I to know better? Just the person with the bump.

Since the pain in my neck and shoulder hadn't gone away, I had started going to a pain clinic. I asked the nurse about my bump, and she suggested I have my primary care doctor look at it. So I did. I'm a good listener. Back in my car I go.

My primary care doctor also thought it was just scar tissue, but ordered an MRI and suggested I go to a fancy schmancy neck guru at Abbott Northwestern Hospital in Minneapolis for a second opinion on my neck. So I did. Again, I'm a good listener. No answer about my bump, but back in my car I go.

The fancy doctor in Minneapolis didn't even touch me. He ordered a CT and EMG and didn't really even tell me how or when they would be in touch. A week later I received a COPY of a letter that he had sent to my primary care doctor stating that the discs above and below the C5 disc I had surgery on were deteriorating, but weren't yet ready for surgery. "The patient" (that would be me) should proceed with cautious treatment for the time being.

The patient (me) waited to hear from someone, anyone, to figure out what that meant. I never did, so I took matters in to my own hands again. I called the guru's office and talked to the nurse. She said that there is damage in my neck, but doing surgery at this time isn't recommended (thank goodness) and I should try imagery, physical therapy, ice, heat...she went on and on. It was almost comical. It told me just how little she and the guru actually knew about me and my history. It also told me that they didn't read any of the eight pages of information I had to fill out in order to walk through their front door. The guru would not be seeing me again. But, now I had imagery in my hands, so I went back to the pain clinic. Back in my car I go.....

The nurse practitioner at the pain clinic took my images and spoke to one of the anesthesiologists who does procedures at the clinic, and suggested that it was time to do a Radiofrequency Ablation. The easy way to understand it is that they go in between the discs to reach the inflamed nerves with a cannula or large needle casing, and insert a radio frequency electrode to zap the nerve and burn it. The nerve will grow back, but usually not for 6-12 months. While it is dead, your brain will not receive pain signals from the nerves. The patient is thinking this sounds awesome.

In order for insurance to pay for this procedure, two tests have to be done first with just lidocaine to make sure they have the right nerves. The nurse thought that it should be the two discs below my surgery, especially since my friendly BUMP lived down there and appeared to cause me a lot of pain.

I went in for my first test and the doctor met with me a few minutes before the procedure. He pulled up my films, and for the first time in the past few years, he just talked and listened. It was amazing. He didn't agree with the placement of the test, and felt that the Ablation procedure needed to be between the three discs above my surgery. I then asked him about my bump. He felt it, and the first thing he said is that he thought it was a screw, even going so far as to say that he could feel the round head of the screw. He seemed very curious about it, and said that whatever it was we needed to look at it. It appeared very irritated, and almost bruised. He said that the procedure they would be doing would be done under xray, so he would have the radiologist move the machine over that area. 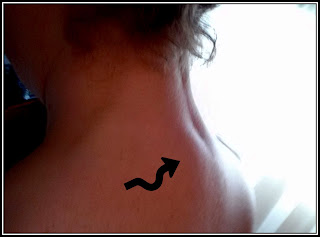 Guess what. The bump is a disc that has turned, most likely from all of the spasms and irritation in my neck. I have so much tension in my shoulders and neck. So the lump you see is the spiky part of a disc that should be laying or lying or even telling the truth horizontally with my shoulders. "Not cool"...said the patient.

The wrap up:
Test number one worked great. I had amazing relief for thirty minutes. I had to wait for two weeks between the tests, so test number two is tomorrow. Don is busy tomorrow, so Andrew stepped up to the plate and is taking me. I am very grateful, and hopefully I will get the same kind of relief that I did after the first test. I'm not sure how soon they can perform the procedure after that, but I'm hoping it's soon.

I start physical therapy the first week in June to try to loosen up the muscles and tension, and maybe Mr. Bump will go back and live where he's supposed to. It will only be myofacial release (massage, woot woot) for several weeks. Nothing that will irritate it more. I literally want to hug that doctor right now. All it took was ten minutes of listening, and some compassion.


Maybe it was just some compassion.
Posted by Sheri at 4:12 PM