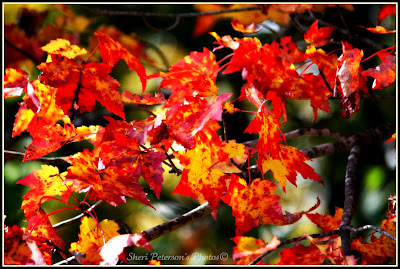 Ahhhh......the fresh, crisp feel of Autumn. To me, there's just nothing better. People think I'm crazy when I say that I don't like warm weather, but I really don't. I tend to spend more time in the house in the summer than I do outside, even though we have a home on a lake. Obviously, if we have company I'm more than happy to be out on the pontoon, but our lake isn't the best for swimming, so air conditioning is my friend.

Once it drops below 70 degrees, I am so happy. It's like a whole new energy washes over me. I actually feel like being outside, pulling a few weeds out of the garden, walking the dog. All of the deer flies and mosquitoes that have been buzzing and biting all summer seem to go away. All I hear at night when I walk outside are a few crickets and frogs. It's awesome.

And lets talk about baking and making stews and chili. Y-U-M!! My husband went fishing in Northern Minnesota last weekend, and I spent the whole time eating chili and caramel apples. Heaven!! Well, I didn't exactly eat the whole time, but when I did eat, that was what I had.

So that's all I've got. My blogging brain seems to be a bit empty as of late, but at least I'm happy to say that I am thoroughly enjoying reading all of your blogs, and breathing in the cool, crisp air. Enjoy!
Posted by Sheri at 8:33 PM 1 comment:

Is there such a thing as a woman that doesn't constantly feel guilt? In high school, I always felt guilty because I put off doing my homework until early in the morning, especially my creative writing projects. What can I say, my brain just doesn't function at night. I will admit that I still have nightmares about my homework not being done, and I graduated in 1982!! What the heck is up with that? I'm sure some great psychologist has an answer out there, as I'm sure I'm not the only one with that recurring dream.

As a new mom, I always felt guilty because I didn't know if I should be staying home or going back to work. To try to settle the big conflict going on in my head, I went back to work part-time. I decided to work during the evening and some on weekends so my kids wouldn't have to go to daycare, but then I felt guilty for not being around for my husband. I will admit, however, that I did think it was good for him to have that "alone" time with the kiddos. I think that he appreciated me a little more when I got home, except for the times that he was too frazzled to appreciate anything because one of the kids had cried the whole time, or thrown up all over everything. Ugh!

When my last baby started second grade I went to work during the day. The guilt started then because I wasn't home to greet the kids when they got off the bus. After one perverted bus driver started buying gifts for my daughter and dropping her off at the front door (not legal), I changed my hours. That meant working less hours a day, but more days. I'm sure that led to more guilt of some sort.

When the kids got to be older, I felt they needed me around more. They DIDN'T think so, but I knew that they did. I quit my job to be around. It was definitely the right decision, but money was tight. You know what, money still is tight, because I have never gone back. GUILT! The kids moved out, we bought a cabin, I took up photography and started writing blogs, and the rest is history. The guilt I carry at this point is so overwhelming that it isn't even on the charts.

So what is the deal with this guilt business? In some section of my brain I have the ability to rationalize that I keep two homes running, the bills, the laundry, three cats, one dog, a husband, three adult children in touch, and life in general. Yet, as the hours seem to fly by as minutes during the day, and my husband shows up after work at 4:00 and often finds me still in my flannel pants and a t-shirt, I just want to melt into a puddle. I always find myself trying to justify why I still look like hell, as if my husband would expect me to be in a dress and heels. Actually, he would probably appreciate a pair of jeans and a t-shirt, but some days just get away from me. I'm not lazy, but most of what I do doesn't involve leaving my home, except walking Brutus (our dog), and that definitely doesn't involve getting "pretty". Usually just the opposite.

I always swore that I wouldn't be one of those wives that wore sweats and let themselves go, but I find myself getting more and more lax about the amount of time I put in to my "beauty" routine.

Does anyone else out there feel this way?
Posted by Sheri at 2:57 PM 1 comment: