When You Don't Have Clothes.....Your Friends Sure Do Come Through! 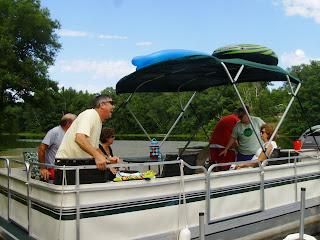 Yesterday Don and I were invited to an awesome pontoon party at our friends house, which is on a sweet little lake about a half a mile down from ours. Our "usual" group was all going to be there, and it was proving to be a beautiful, hot day. We had had a little rain, but Don said the radar was clear. I had my swim suit on with a sundress over it, and figured that since it was a boat party, with dinner on the patio afterward, I didn't need to bring extra clothes. Well, I was the only one thinking that!! 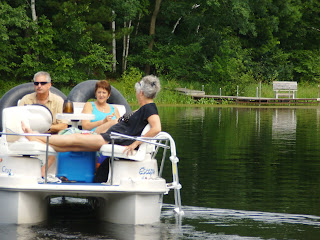 We floated out on the water for a couple hours, and in the water, and then the black clouds moved in. When the first rumble of thunder let loose, we decided it was probably time to get out of the water. It was still plenty warm outside, and honestly, by the time we got everything up to the patio it was only a light sprinkle of a rain. Everyone changed in to their dry clothes, but the humidity seemed to be keeping my suit and sundress just as wet as it was when I got out of the water. 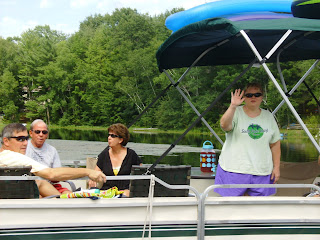 Que the girlfriends. My friend Mary and her husband had driven their pontoon home so they could change and drive back to the party. When she came back, she came with pants and a shirt for me. I am considerably taller and bigger than Mary, and I dreaded even beginning to try them on, but she swore they would fit. Mary has recently lost a pretty fair amount of weight, and she has some clothes that no longer fit her. So off I went, and believe it or not, they actually fit. How often can you even go in to a store and find pants that fit?? For me, practically never! Problem was, I still didn't have any underclothes, so I was pretty self conscious about that. Well, our friends Sandy and Russ decided to drive their pontoon boat home and drive back too before it got too dark, and here comes Sandy with a bra. Again, we hadn't talked about it, and the chances of someone elses bra fitting are slim, but in the house I went. It was perfect. I felt SOOOO much better!!

The Lessons I Carry In Life

Fair warning, this post is going to be raw and honest, and for some of you reading it, it may cause you to look deep within your self and question some of the things you do, say or think. Things that may cause others to feel a certain way. Also, there is a link at the bottom with a song that is really lovely that you may want to start and listen to as you read this post.
First, for some reason, my friend Priscilla, who lost her life to ovarian cancer one and a half years ago, has been floating in and out of my mind. She always had a way of doing that, even when she was alive. Priscilla had one of the most beautiful souls I have ever met. My heart fell in love with that woman. She loved so unconditionally and purely. We differed in our beliefs. She had total and unwavering faith in her God. I do not, but we had some of the greatest conversations about faith and life, both of us accepting of the other's views. I often wondered how she could possibly hold on to that faith in the face of what she was going through in her life. I didn't meet Priscilla until she had already been fighting her cancer for a few years. She had two boys, one still in college, and another with a beautiful wife and young children. So much life to live, and she knew that she was going to have to let it all go. I'm sure that there were moments when she was alone with her illness that she was sad or angry, but whenever I saw her, she seemed to have this incredible sense of humor, almost to a fault. She did hate to leave her boys, as any mother can imagine. As we all know, just because they reach the age of eighteen, we never stop being their mother.

Here is a good example of her strength and humor. We stopped by her home to take a meatball dinner to her and her husband Charlie. She was talking about a trip in to town that she and Charlie had made, and that she had been thirsty for beer. She said "why not, it isn't like I need to watch my weight anymore". This was actually true. She had lost so much weight from all of the tumors taking up space in her abdomen and making it difficult for her to eat and digest food. At this point, if something sounded good, she should eat or drink it by all means! She then followed up with "we couldn't decide if we should get a six pack or a twelve pack". If I remember the story correctly, she said "we might as well just get a six pack, because I probably won't be around long enough to drink the whole twelve pack". She giggled. All of us felt like crying, but she giggled. I still think that she was trying to make us feel better, and to keep the mood light, but she never ceased to amaze me.

The other thing that she did, besides just being a great friend to talk to, was, she encouraged me to get some abdominal pain checked out that I kept putting off. It turned out that it wasn't anything terribly major, but I did need to have a hysterectomy. She was my support system during that time, and I was forever grateful to her. Every time I would run in to her, it would be the first thing that she would ask me about. Her ovarian cancer started out as just a "pain", and when they operated to remove some endometriosis, they found cancer. It was unexpected, and shocking to say the least.

Two summers ago we had a "floatilla" on our lake with all of our friends. We would tie our pontoon boats together, bring coolers of beverages and enough food to feed an army. We would spend the day on the lake, and after this particular "floatilla" we went back to our home and had a camp fire. Priscilla's husband loved to play his guitar and sing, and we spent the evening basking in his music, and the warmth of our friends. Priscilla was very tired, but she stayed with us the whole day and evening. Charlie had even brought with a small fishing boat so he could take her home if she got too tired, but she stayed. Five months later she was gone.

There is a song, "Hallelujah", and my favorite version of this song is sung by Jeff Buckley. I could always picture Priscilla's husband Charlie singing this song while he strummed along on his guitar. Charlie has a beautiful voice, and he loved to play for Priscilla. I sent him the sheet music and a CD with this song on it. He didn't have time to learn it before Priscilla passed away, but I saw Charlie a few months after Priscilla's funeral, and he said that he had been working on it, and just about had it. I haven't seen him again to have a chance to listen to his music, but I hope to some day. Whenever I hear this song, I always cry. It's a given. Even if it's being sung by someone else, like it is in the Shrek II movie. Yes, I cry during Shrek. Awesome movie!!
Hallelujah, by Jeff Buckley.....So Beautiful

I am not a religious person, but I am spiritual and believe in Karma. Basically, your actions will have a direct effect on the cycle of cause and effect. In Sheri terms, it means "be nice, or it will come back to bite you in the ass". If you live your life according to the Bible, you may live by Luke 6:31,"Do to others as you would have them do to you". Either way, it is an awesome concept to live by. So as I sit here today, with tears stinging my cheeks, my hope is that I can embody even a portion of the lovely kindness that my friend Priscilla showed to the world.       I miss you my friend.
Posted by Sheri at 2:33 PM 1 comment:

The picture below might look like something naughty, but you know what, it isn't. I shared it because it was funny and silly, and made me smile. My sister in-law Lori took it this past weekend when we were out on the pontoon, and had had a couple (OK, maybe a few) too many cocktails. The weather was warm, the wind was light, the music on the radio was perfect, and I had the giggles. I can't even remember the last time that I had the belly laugh giggles, and it felt fabulous!!

More than anything, I love the way that Don and I are looking at each other. After being married for twenty-six years, those moments don't happen as often, so when they do I treasure them. Plus, I'm still kind of impressed I can get my leg up that high!! lol!

Live, Love and Laugh my friends. It feels great!!! 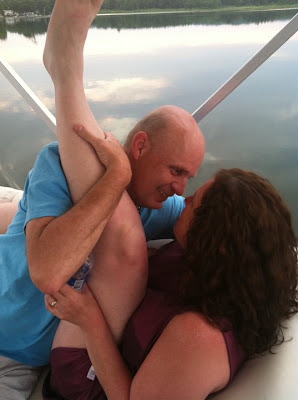